‘Don’t you get tired of lying’ James Brown comes for Bobrisky for saying he spends N75million on hair. 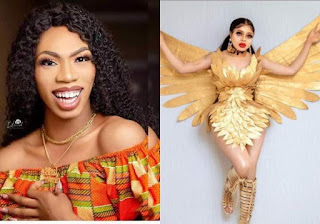 Nigerian crossdresser Idris Okunneye popularly called Bobrisky, has been dragged by his mentee James brown over a recent statement on how much he spends on his hair.

As it was earlier reported that Bobrisky, in a video shared on his Instagram page, stated that he spends N75 million Naira on his hair and makeup.

Bobrisky further analyzed how much he spends on looking good. From the fees, he pays his makeup artists, the wigs he buys, to the prices he pays his hairstylists and summed everything up to be N75million Naira.

However, James Brown, in a video shared on his Snapchat, dragged Bobrisky, urging him to stop lying and deceiving his fans.

James Brown further questioned Bobrisky on when he would stop lying, adding that he also engages in the service of makeup artists and that the fee is never up to N75 million.