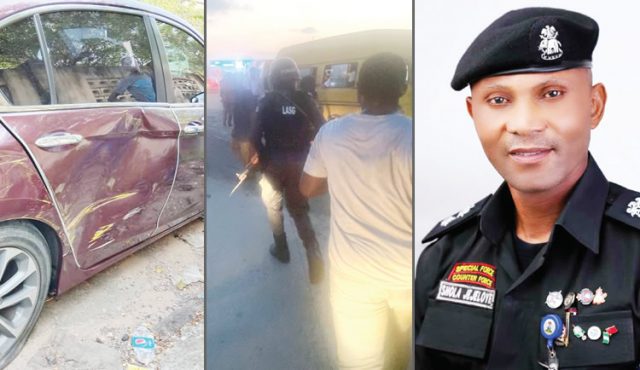 A Branch Manager with Wema Bank, Bamidele Ajala, has been shot by personnel of the Lagos State Environmental and Special Offences Enforcement Unit (task force) in the Oshodi area of the state.

THE PRESS gathered that the officers shot the 39-year-old in the hand while they were fleeing with a yet-to-be-identified LT commercial bus driver, who bashed his car.

Our correspondent learnt that the driver crashed into Ajala’s vehicle around Oshodi, inward the Airport Road last Tuesday.

After the crash, the banker said the driver claimed that he lost control of the vehicle when some area boys working with the task force officials dragged steering with him to force him to stop.

In the process, the driver rammed into Ajala’s Honda Accord and damaged one of the back doors.

The 39-year-old said he wanted to take the driver to a police station to report the case, but the task force officials refused.

Ajala said, “The driver said the area boys usually worked with the task force officials to track down drivers and that it was when they were dragging his steering with him and pepper-sprayed his face that he rammed into my car.

“So, the real task force officials came, asked why I held the driver’s trousers and I told them that I wanted to take him to the police station to make an entry of the accident.

“The task force officials said they would handle it and I handed over the driver to them. The officials called the area boys to drive the commercial bus and the driver away, but when I realized that they were trying to escape with the driver, I ran into my car and caught up with them.”

The Kogi State indigene said when he asked where they were taking the driver to, one of the task force officials shot his right hand and the tyres of his vehicles.

The victim, while demanding justice, said the officials protected the bus driver to prevent him from making a report that would indict them.

“At this point, a mob had gathered and in a bid to disperse them, he started shooting and one of the bullets hit my upper left hand. He did all these to prevent me from double-crossing them as I did when they were escaping with the driver and the bus.

“My shirts and inner wears were soaked with blood after being shot, but people rushed me to the Kupa Hospital on Ajao Estate, from where I was referred to the Airforce Hospital in Ikeja for further treatment.

“I want justice. The task force officials knew if I was able to take the commercial driver to the station, he would mention their names.”

An x-ray conducted on Ajala and sighted by EYE WITNESS showed a bullet in the victim’s left hand.

A spokesperson for the task force, Raheem Gbadeyinka, said the task force did not operate in the area on the day of the incident.

“Not all policemen are part of the task force; there are some people who parade themselves as task force officials, but they are not.

“Regarding his case, it has to be proved beyond reasonable doubt that the policemen are actually task force men.”